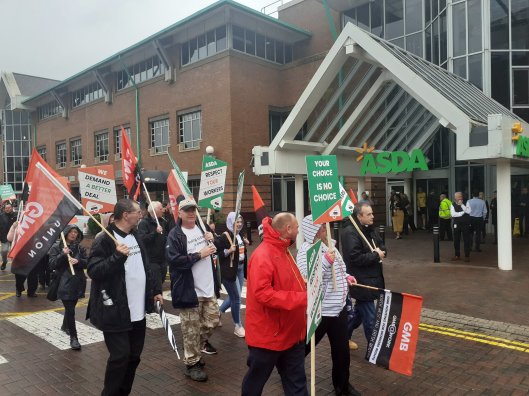 Chanting “No ifs, no buts, No Asda cuts”, the best part of 1,000 Asda workers, members of the GMB trade union, marched on Asda House in Leeds on 14 August to protest against their company’s imposition of a new punitive contract called Contract 6.

Workers came from as far as London, Bristol and Scotland to demonstrate against management intimidation to force staff to sign up to what was described as a ‘Martini’ contract, which will allow bosses to force colleagues to work “any time, any place, anywhere”.

In return for being forced to work bank holidays, paid breaks being scrapped, cuts to holiday entitlement, slashing of night shift pay, and shifts being changed at 4 weeks notice, workers are being bribed with a wage increase to £9/hour and threatened with the sack if they don’t sign up!

Management are using strong-arm tactics of one-to-one interviews, then a second one, to pressure staff, and understandably in many stores where the union is not well-organised, staff have been intimidated into signing up under the stress and fear of losing their jobs.

But tens of thousands haven’t signed! 3,000 staff could end up £500 a year worse off under this pay ‘increase’! In any case, the minimum wage is supposed to reach £9 an hour in 2020 anyhow. £8-21 basic, the minimum wage, this is what’s paid by the Asda, part of the Walmart empire, the biggest company in the world that made £129 billion profit last year! 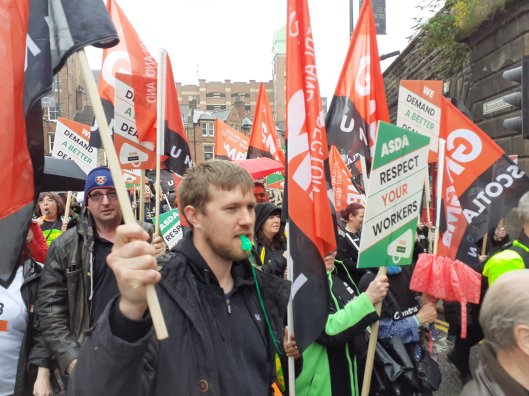 However, for the predominantly part-time, low-paid and mainly female workforce, it is the threat of shift days and hours being changed that is the main worry when so many have built their work-lives around family, children and caring responsibilities.

The demonstration was noisy and angry, but this anger and militancy of the workers has unfortunately not been matched by their union leadership. The door to the imposition of this Contract 6 was opened last year when the union did not oppose the introduction of a very similar, supposedly voluntary, contract called Your Choice.

Most colleagues, 87%, did not take the £1/hour bribe then but all new staff had ‘no choice’ and are started on the new flexi-contract. Then, of course, Asda bosses used that wedge to make the new contract compulsory on all staff rolling 6 old contracts into Contract 6 “to make it fair”!

Whilst the GMB has negotiated a few concessions from the original contract offer, in their consultative ballot 93% rejected accepting the new contract. But with only 3 months to go to the imposition of Contract 6 in November, the union has not even started an industrial action ballot of it’s 30,000 members.

Even worse, at the rally in Leeds City Square, GMB general secretary Tim Roache did not even mention the words ‘ballot’ let alone ‘strike’ in his speeches, but had a more pleading tone appealing to Asda bosses to “do the right thing” and respect it’s workers.

Well, of course workers do want respect but their bosses have shown by their bullying management only utter contempt and that they’ll only change if forced to. 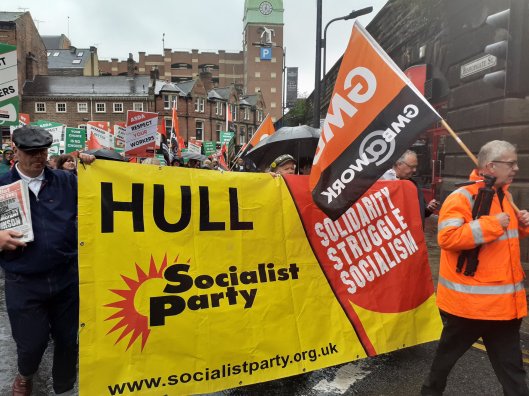 This second and bigger demo at Asda HQ must urgently be used by the GMB as a launch-pad for an energetic campaign for a big strike vote in an industrial action ballot. If the union appeared serious in trying to stop this contract imposition rather than just hoping for one or two more small concessions, then even those staff who have signed under duress or are already on this contract could be enthused to join the union and the campaign, especially if it was linked to a £10/hour minimum wage across the board pay demand.

Whilst only 20-25% of Asda workers are in the union, many stores have 80-90% union membership where a ballot could be won and strike action would leave shelves empty and check-outs un-staffed. In the cut throat world of supermarket wars, it wouldn’t be long before Asda were losing customers and profits and could be forced to back down.

Given the Big 4 supermarkets are all cutting thousands of jobs and are imposing similar flexi-contracts, the GMB should approach the USDAW and Unite unions for a joint campaign in retail, including future co-ordinated industrial action, to stop this ‘race to the bottom’.

Socialists in the Trade Unions